Here I am again, trying to not just pick through the obvious or delve into the dramedy of the week for each episode of Outlander.

Truth be told,  I am doing it more to challenge myself, tear off a couple of layers and see something a bit different. It helps me stretch my brain basket out.

The plentiful nuggets of common ground between characters and the land are both unmistakable and subtlely scattered throughout the episode. It gives the title of the episode a lot of meaning.  I am going to nudge that aside so we can experience the remnants of all the things that aren’t and how they showed up numerous times in Common Ground.

We all do it.  Take one glance at someone or thing, get our first impression, assume we know the story and continue on with that notion in our head. We may tend to block all the other stuff out because it doesn’t suit what we have already convinced ourselves is real.

Starting instantly with the Governor Tryon scene. This guy. Him and his “I want the best people to settle the land” and “I’m noble and wonderful and everything good about the British.”

We know that there is a dash of dastardly tucked underneath that powdered wig and tighty whities (stockings) of his.  Certainly not all noble nor wonderful. In fact, here we have a couple of duplicitous characters.  Jamie has been a traitor before. That is where I was going with the “not everything is what it seems” with this particular scene. I believe Jamie eluded to this in his comments to Claire about making this a great country for Brianna earlier in the season.  It certainly isn’t just in building Fraser’s Ridge but the impact he might have in the coming revolution.

Oh, then we have Marsali.  Remember when we first met her? Our initial impression? Wow. What a snide wee thing she was.

But why? Outwardly, she most certainly hated Claire and wasn’t afraid to show it. In return, many instantly thought her a mean-spirited brat.  Marsali, let us not forget, is a teenager. Her only knowledge of this Claire woman is the image she had painted by her very bitter mother (whom she loves dearly, she should, she IS her mom).  Any daughter would take her mother’s side and react accordingly. Claire, being the adult, totally understood this and didn’t take it personally. She let it ride.

What we saw at the beginning of the episode is the growth of both of these characters. How many stepdaughter/mother relationships never heal?  You can have two fantastic human beings who will hate one another forever because of the completely separate relationship of two other people they both love. It is a real head-scratcher. ( Yes I know…some people ARE just horrible, I’m not talking about them😉) Marsali and Claire have chosen to look at one another as individuals. Apart from those relationships and are better for it. Imagine both of them taking their first impressions and holding onto them?  How ugly would that be to watch, week after week?

Leaving Marsali and Fergus, of course, reminds Claire of leaving Brianna. Jamie opens his mouth and the word version of cotton candy, unicorns, rainbows and butterflies escape his lips. It seems such a special moment, between Jamie and Claire.  If we were to step upon that moment we would see the love and the connection.

What we wouldn’t see is the pain. Claire being torn up on the inside. How many times has this happened to us? In public, surrounded by people and able to look to the person in front of us and manage a grin – all the while, inside, we’re screaming in pain?  Yet, there we were, fooling nearly every person in the room because they only see what we allow them to. 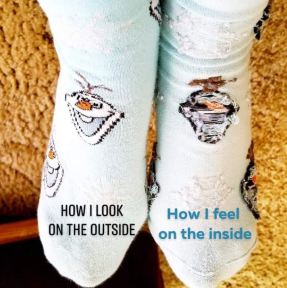 My own socks tell us this story.

It doesn’t always have to be people, it can be nature.  It was present throughout this episode.  Frasers Ridge itself, visually captivating, has a dream-like quality to it.  When that happens, the brain does funny things. When we think something is beautiful, we tend to feel better when we are around it, when we feel better, we feel safer, when we feel safer, we may let our guard down.  Letting our guard down isn’t always a horrible thing but when there is something else out there that is looking to harm us, it uses that vulnerability to its advantage.  Nature itself is like this, whether it be the creatures that make it their home or the weather itself.  Both of these can dispell the wonderful first impression of beauty such places give. It reminds us just because it’s pretty, doesn’t mean it’s kind.

Let’s get comfy and talk about Roger and Bree. After last weeks dumpster fire of miscommunication, what do we have to look forward to? By all appearances, not a fricken thing.  After Brianna left Roger at the festival to find a TapCar back to Boston we don’t have much hope.

Roger has returned to his various shades of brown existence at Oxford.  He seems to be going by exactly what Brianna has given him during his call to her and vice-versa.  There are no questioning things deeper on either part and yet, if one of them had, so much of the miscommunication could have been remedied at least a little bit.  Settling for what is on the surface can sometimes be our way of taking the easy way out. Let’s face it if we simply take the generic “I have to go grade papers”, it excuses us from taking a chance and asking “Do you miss me?” Sure, we avoid the possibility of them saying the very thing we fear but it also prevents them from saying the one thing we hope they would.

Fiona looks quiet and innocent but that girl has got all the people figured out and just so happens, she serves it with grace.  Everyone should have a girlfriend like her.  The kind that people sadly mistake for a piece of the furniture. She sees and hears everything. They are the ones that will be able to tell you what’s what and where you can find it.  We would be better humans if we paid more attention to what women like Fiona have to say instead of keeping them a silent witness to everything around us. I bet if we all thought about it, we could think of a few of those women throughout our lives and be surprised at how we allowed them to stay in the shadows. How we still utilized their gifts and input when they shared them but rarely asked them for it. Hell, you may be one of those people yourself.  So let me just say…you are valued…in case you haven’t heard it lately.

Now, to the glaringly obvious “it is not what it appears to be” is our bear.  First, the menace and destruction were thought to be the Cherokee neighbours. Then, the monster bear. There were pretty clear signs pointing toward that. It likes meat, pooped like nobodies business, left a pretty serious claw slashing down the shoulder of Findlay, Fraser’s trusty steed. Had the Fraser’s been aware of the Cherokee’s dealings with the cracked but not broken bear-man, they would have known what they were truly dealing with, rather than go by what their eyes were telling them.  This just proves the whole “working together” gets better results theory. Pretty simple stuff, this one.

I must mention the fact that Brianna went to Scotland WEEKS ago to visit her MOTHER! I don’t think this was a simple case of Brianna just missing her Momma.  Roger thinking Brianna would only know the information he was giving her, seems to have been a case of underestimation. This is something many of us do as well, which is why I love how these characters are written. They are relatable.  We often predict what others will do based on what we would do. We interpret others actions as a reflection of our own intent. Sometimes we are accurate but not always and it is the ‘not always’ that tends to cause us to stumble.  It pays to look deeper, or step back to see the big picture. It may be uncomfortable but the outcome will often be a positive one.

First impressions should be just that. An impression. They are developed in an instant but given time, they can be remoulded, reshaped and in some cases, shattered and recreated. The more we discuss, observe and listen, the better we get at understanding the whole picture.  The whole picture tells a story one word never could.

RTs would be cool if you feel others might enjoy a piece of this. Come live tweet with us Canadian folk, we watch Outlander on W Network  at 8 PM MST Sundays. We use the hashtag #OutlanderCAN to keep track of one another and help others gauge where the commercials are. Yeah…we have phones with cords AND commercials.  It’s ok though. We are a hearty people.

Until next time…and I already CAN. NOT. WAIT!