Today it was announced that Caitriona Balfe was once again nominated for a Golden Globe for her stellar performance of Claire Fraser.  This got me thinking of how lucky we are to have her in this role. My thoughts quickly turned into how all the pieces of this production have fallen into place at the perfect time for it to become what it is.

As far back as the ’90s, I recall talking to a friend about the idea of the Outlander book series being made into a television show. That was when there were only 3 or 4 books on the shelves.  Caitriona and Sam would have been teenagers around then, Ron D. Moore was in his Star Trek phase of life.

Diana Gabaldon, the creator of this universe we so happily devour, has spoken of the many times the books had been optioned but those offers never came to fruition.  In the end, Jim Kohlberg had the rights for over five years. It wasn’t until Ron D. Moore and his producing partner Maril Davis approached him with the idea of an epic TV drama, which started the ball rolling.  Both Ron and Maril visited Diana personally with their vision and let’s just say, the rest is now on TV screens around the globe for our viewing pleasure.

Imagine these pieces, all falling into place at the right time. Individual choices that happened to intersect by chance.

I sit back and think about this puzzle. I have a hard time wiggling my brain into believing they could have found a Tobias, Sophie, Caitriona, Sam, Richard, Duncan, Lotte, Nell, John, Graham, Cesar, Roman, Lauren…the list just goes on and on., at any other juncture at any other time. The secondary characters have also been absolute magic and it seems if one were off – the show may have tumbled like a Jenga tower. (Or more likely it would look absolutely nothing like it looks like now and maybe I have a pathetic imagination but I simply can’t picture it looking any better.)

The writers, crew, sets, costumes and all of those involved in this production seem to have such a passion for this project it shows deep into the guts of it. When viewing the behind the scenes photos or videos, even when they are standing in the cold and gloom, there are smiles and laughter. The crew and production staff that take part in online chatter with fans do so with such a joyful heart, it is a nice reminder that when those creating something enjoy doing it, it makes it a worthwhile thing. 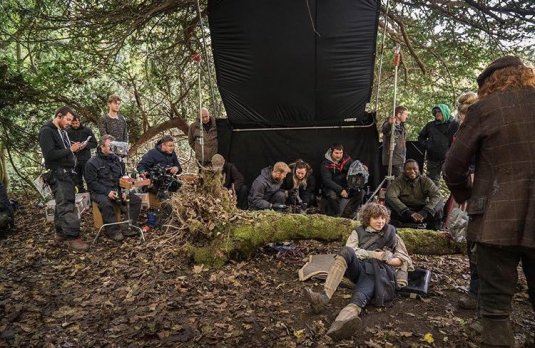 The cast seems to genuinely enjoy one another’s company. They do a lot of press, conventions, interviews and interactions on social media.  The truth is, they don’t have to.  Some media is expected from the studio, sure, authentic interaction is an entirely different thing. We have all seen cardboard interviews between costars before and the cast of Outlander is so far outside of that sphere. They truly make it fun to watch them together. The trust they have for one another is a pleasure to see.

I mean, really…think about it. If Caitriona hadn’t decided she had her run with modelling and not gone back to her first love of acting, we wouldn’t have our Claire. How could that be a thing? Had Sam gotten any of those Game of Thrones roles he had tried for…he wouldn’t be our Jamie Fraser. It doesn’t make sense to me how we could have anyone else in these parts now.

It all leads to that one, beautiful thing my friends…serendipity.

May we have the honour of enjoying it for many more years.