Still taking a detour from the blog bursts that look like recaps.  I feel there are enough ppl doing those now that, well, even doing it Canadian style with bacon isn’t different enough.

Episode 3 of Outlander was full of…Oooooh’s , awwwww’s & Snorts so I finger I will just talk about those with you.  Heartstones is something us ABOotlanders are not short of.  We are a bunch of sulks (I say that because I am…and I do not like being lonely).

Heart STONES are those things in your heart that when they are hit, they send you back in time, memories.  I believe that is why we are so connected to Outlander.  It isn’t just our own created memories but those Diana Gabaldon authored when we read the books for the first time.  How many times have we seen comments telling new readers how jealous we are because they get to experience that first time feeling?  Its a nostalgia we connect to from remembering our “first time”.  It really is a better “first time” than the other first time… that’s rarely enjoyable.

Aaaaanyway.  That’s how I now feel when I watch the show. It’s like a new read.  I recognize it, it’s familiar…yet it is different so I get a new thrill from it.  It’s not about if I like the changes, only that they exist and create new heart stones for me and my friends to travel through together.

The name of the episode is “Useful Occupations & Deceptions”.  We don’t have to reach to far to guess what this is all about so lets get right to it.

Snort #1– The first laugh of the show for me was Jamie’s wee SAWNY going missing.  So what you are saying Jamie is… 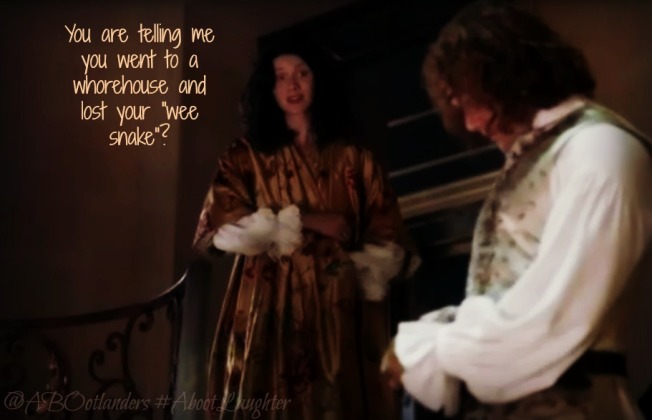 This could just be because my brain has a disorder. Its called ‘inthegutteria’. It’s catching. You might have it now. If not, you may not find me near as entertaining as I do.

Snort #2– Louise. Sweet Louise! She MADE the interaction with Mary & Claire go to another level of giggles.  Her SHOCK at the accusations Mary made about men and their things…was…snortworthy. 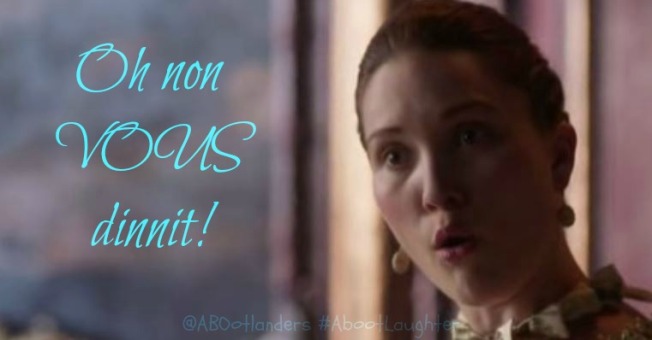 Ooooooh #1 – Claire realizing who the truck Mary Hawkins was!

For our Frank lovers…they got another peekaboo at him and Claire finally put the puzzle of where she had heard the name before!  You could see she wasn’t particularly thrilled.  I heard a few people say “She didn’t seem to care when BJR was dead so Frank was before…but now she is all worried about him?!”  Let’s look at it this way – When Claire found out that BJR was dead, she was in the midst of taking care of Jamie, making sure he didn’t die.  Once she did that…it’s kinda late to be thinking about saving Frank.  Pragmatic is one way I would describe Claire, I can’t see her dwelling on something she knew she couldn’t change. HOWEVER, once there is something she thinks she can fix or change…ummm…dog with bone sound about right to us?

Oooh, Awww N Snort – 3 for the price of one – Murtagh getting some lovin! #Suzagh! Sounds like a great clan call…for tail.  There was a couple of things about Claire walking in on her ladies maid, Suzette (zee lov-a-lee Adrienne-Marie Zitt)  and her husbands Dudley do right-hand man.  1…Claires expression of shock. Now, was it shock that she caught them doin’ it? Was it shock that Murtagh was getting more action than her? Was it shock that Murtagh could be ungrumbly long enough for a woman to want to get jiggy with him?  I think it could have been any or all of those reasons.  2. The fact that she hasn’t got lucky in so long she didn’t recognize the sounds of two people gettin jiggy w’it.

The surprise coupling of the 2 characters gives Murtagh a lil more zip & brings the staff in the house to “human” mode., not just following picking up after everyone.  #Suzagh all the way!

Oooh #2 SNAP!  Claire done looses it on Murtagh because he reminded her that she isn’t getting any.  That face…says it all. 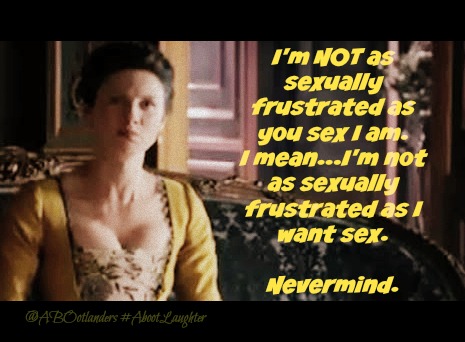 After her poop ungroups, she tells him that BJR is alive & the deception duo is born.  For now – by the end of the show Murtagh has his kilt in a wad because she didn’t tell him.

Snort #4–  That Duverney dude is funny. Not just his wig either.  Telling Jamie while playing chest he was going “get him” and that he gave him permission to respect him less.  See in my world, those are are things I would say to Jamie too…maybe not playing chess…but playing- chest? See…I find things entertaining because I make them up in my head sometimes.

He has this way of wrapping scenes around his fingers…and getting wanna be Kings to kiss his fingers.  Knowing this guy, I sure as heck would NOT be putting my mouth around his digits…I see where he goes with those! 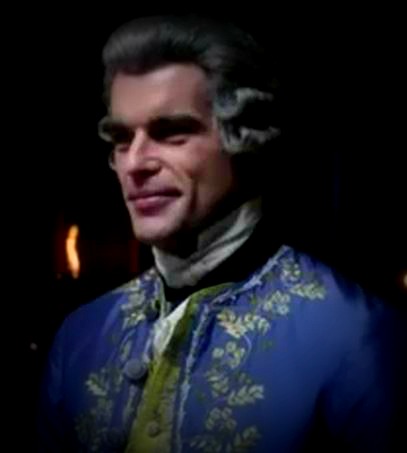 I mean. Really. The Comte St.GermayIhavesomemore?

Awww #2– Master Raymond plays Ann Landers. Claire doesn’t really ask for advice but Raymond gives it.  Stop pouting about being bored lady and go do what you like doing. Lancing boils & sticking your fingers in puss n guts! Its nice to see someone looking out for her isn’t it?

Snort #5 is a loooong giggle. “Claire goes to the Hospital”.  We could write a childrens book about this you know.  The look on Mother Hildegardes face when this “lady” came and said she wanted to use her medical knowledge and help. “Ummm, go dump a bedpan ‘lady’. See you never.”  Claire doubles up the back bone and not only empties bed pans but starts drinking them. That will show her! 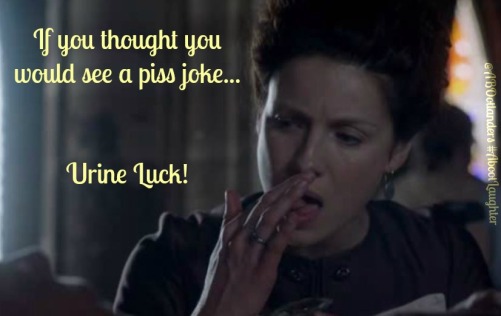 Ok…she wasn’t drinking out of the bedpans…but she was taste testing them.  Which baboom…makes Momma Hilde take notice and decide “Hmmmm, if she likes urine, she’s gonna love it here…let’s keep her.”  And BOUTON! Well…yeah…somehow we all have fallen in love with the little hairball. It sure helps when you remember loving Bouton of the books. Its not about the dog they got so much as it is about that they got a Bouton!

The scene with the nasty puss filled groin splinter (ummm branch not splinter) was spot on. Freaking LOVED the moment Bouton showed his talents & at the same time helped Claire get in good with the big nun on campus.

Awww #4– #WeeFergus .  Like we didn’t get to meet enough awesomeness in this episode but then we get the lil bandit too. It was a smorgasbord of characters being brought to life. I had the constant “awwww head tippy” going on the whole fricken episode.

All these feels in the awww spot

I loved the introduction to Jamie…something we only got a  quick description in the book about how the wee gommrel came to be in their world.  This gave it the character development that the TV character deserved to have.

’tis a delight to meet you!

I loved how he called Jamie dirty names and tried to blackmail him and Jamie’s reaction…I wanted to squeeze both their cheeks! Throughout the episode Fergus (played by Romann Berrux) displays the all the charm of a small gentleman while being the brothelbabe he was.  “Hey, girls love it when I sing the praises of their corset fillers.”  It’s not hard to tell that like Fergus from the book – TV Fergus is going to have us all wrapped around his bitty doigt.

The best move Jamie had this episode? Hiring a pickpocket.

You did the right thing…for interesting reasons.

Awwww #5 – This awww is more of a “Awwww muffin!” awwww than an “Awwww so cute”  awww though.  Jamie was having a party and we were invited.  It was a pity party. Now why oh why wasn’t his wife home to greet him? Pout, sulk, grumble grumble and snark. Once folks showed up for his party he lashed out on them.  Jamie is kinda a bad event planner in that respect.  We came away with it being all about Jamie – if he is going to be a miserable sulk, then why shouldn’t he share that?  Because it sucks Jamie…it sucks.

Pity Parties are not as fun alone

We know why you’re a pouty pants, but we aren’t enjoying it.  You need a lil lovin…that will fix everything. As long as it is with your wife…those brothelbabes…not so much.

Snort #6–  You know Jamie was going to have to swallow his pride at some point. Watching him do it with Mama Hildegard was a good move. Her being a musical savant and all that.  Her view of her friend Bach was less than flattering though wasn’t it? Clever but no heart. Without him, they wouldn’t have figured out the code to the letters Fergus our boy was stealing though!

All the emotions of episode 3 and we wrap it all up in a happy little ball of “relief, happiness, guilt & disappointment. Relief because they believe they figured out who was promising BPC money for this campaign. Happiness because Jamie was happy for a moment. Guilt by Claire because she STILL hasn’t told Jamie BJR is alive. Disappointment in Claire by Murtagh because she didn’t tell Jamie BJR is alive.

Perfect way to  tie that bow up and be ready for Episode 4. 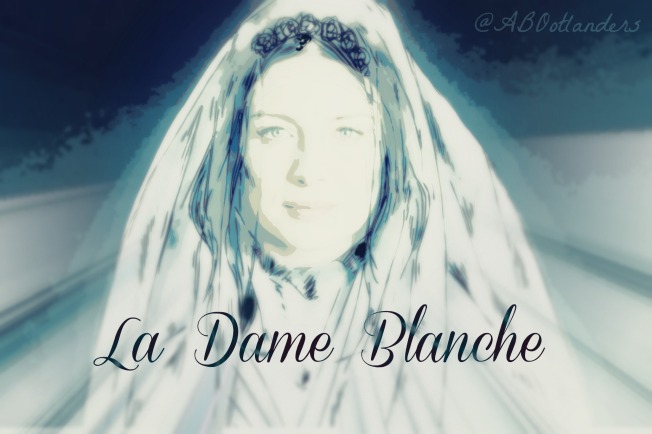