Outlander continues the story with another fast-paced and visually interesting episode and the whole thing is POPPIN’ for me.  The combination of Perpetual Adoration’s softness and grit was something I found all together satisfying.

Soft, gritty and satisfying, just like a razor clam 😘

This episode was alive with undertones I could have chosen for this blog.  Normally I gravitate to what sits beneath the surface and give it a tug. This time guilt pulled at me from every corner.

Every human (who is not 100% psychopath) is familiar with that feeling. No matter how righteous, how good or well-intentioned we may be, we’ve all felt guilty about something.  Guilt is shown in different ways, as we saw in our characters and we know by looking at ourselves, honestly.

The story of one man’s death encapsulated the episode for Claire. There was a heaviness she carried when Graham Menzie’s died, which spurned her actions to head to the UK and interestingly enough, into the past.

She, of course, couldn’t have predicted his death as all precautions had been taken.  We can’t count on logic to keep guilty feelings at bay, the gut/brain connection just doesn’t work that way.

That’s what happens with our guts n brains…

Plenty of us sit with those feelings. What could we have done? If we had only…the should’ves, could’ves and would’ves that we think may have changed the trajectory of what might have happened.  We hold them over our heads with guilt because we didn’t take the actions that we have had all the time in the world to contemplate after the fact.

It’s really unfair, this game we play. No one ever wins. We can replay as many scenarios as we want, that particular moment has passed. We humans need to learn how to forgive ourselves as fast as we have taught ourselves to take on unnecessary guilt.

When Claire was speaking to Joe, it was apparent. She blames herself for getting attached to her patient and like a good friend, he smacks her with a reality check.  Our lives would be much less complicated if we cut ourselves a break, especially with those things that we can’t control. Particularly after the fact.

Pain is to the body as stress is to the mind, and guilt is to the spirit.

One of the characters I have come to truly love is Brianna. In her, I see the combination of the above quote so clearly, especially in this episode.

She literally feels her guilt, whether it is something we believe she should be feeling, she does. When something is said to her that strikes her deep, she folds in on herself. It’s as if something knocks her in the belly. Next time you watch, you will see Bree react physically to the words that connect to those feelings if you hadn’t picked up on it before. (Kudos again to Sophie Skelton for making those subtle yet strong notes for the character)

Ofttimes when we feel guilt it isn’t because we have done something against someone intentionally.  We end up in a space where we see our choices, as innocent as they may have been, caused pain to someone when we didn’t intend them to.

Bree’s guilt comes from not telling Roger the truth about the visit with Bonnet and all that came with it because it was a lot. Did she have good reason to not tell him?  Yes. Did the guilt gnaw at her? I think that was apparent.  Unburdening ourselves of the things we feel guilty about doesn’t always make us feel better though.  That, my friends, is life. Guilt causes internal pain because it’s messy and complicated. As with all other hurts, it takes time to heal.

Bree’s regret was evident. Telling Bonnet he was Jemmy’s father was something she now wished she could take back. She thought he was going to die and take her words with him.  Since he didn’t, she now must live with him knowing this information she doesn’t want to be true. More often than not, with regret comes guilt. It’s painful seeing her go through this as Brianna deserves to be free. SunnuvaBonnet has done nothing to deserve all the space he takes up in her world.

Same Same Bree. This time…we need to get it right.

How much guilt should we feel when we do something we know is wrong?  Is there a scale? Should others tell us the appropriate amount of guilt we should exhibit by the level of our misdeed?  Also, should we project that guilt for everyone to see?  If your neighbour knows you did a baaad baaad thing – do you make sure you look really guilty or do you walk around like you haven’t done a damn thing?

We are now talking about Jamie.  He obviously did a pretty bad thing by killing Knox. Did he have a good reason? He thinks so (I agree). He was going to be handed over as a traitor to the Crown, likely hanged and his family/those on the ridge removed to frig knows where. It was kill or have everyone you love scattered three sheets to the wind AND be killed.

Jamie is no stranger to the murder game. He started his career as a ‘bloody man’ pretty young in life. He killed his own uncle when Dougal caught him being a ‘traitor’.  Traitor might be Jamie’s trigger word. Call him that, he is going to turn off your lights for you.

What did you call me?

He has killed his fair share of men in the service of protecting his family and his beliefs.  Does he feel guilt for it?  I don’t think he feels great about it however, I think Jamie compartmentalizes it. Guilt does exist for him but it’s the guilt he uses as penance. He knows what he needs to feel in order to pay for what he has done.  It is a logical pain that he carries with him. Will he show it the same way that Brianna/Claire/Roger does? No, because he married this particular kind of guilt early in his life. If he allowed it to affect him with great waves of emotion it would stop him from doing the things he needs to do. We don’t always need to see someone’s guilt to know they carry it. We only need to know they are a decent human being.

There are plenty of us out here that have done things, admittedly on a smaller scale than, you know, murder, that we keep close to the vest. We know that our guilt may be the price we pay for the action, the secret or the lie.  That is ultimately our choice and it isn’t always a bad thing.

People may like to believe the only way to be a good human is to be 100% honest with everyone and share exactly how we feel at all times.

That isn’t the most fitting method for everyone. Once and a while, the best people keep their mouths shut and what they are feeling to themselves. It’s almost a superpower.

Ultimately, we determine the weight of the guilt we carry. We can also bring in someone to help us lug it around just by talking about it.  It doesn’t have to be someone involved. It can be anyone to help us take a load off for a while.

That is why Claire had Joe, Brianna had Roger and Jamie had Adso. I mean, that kitten was pretty conveniently placed, wasn’t he? 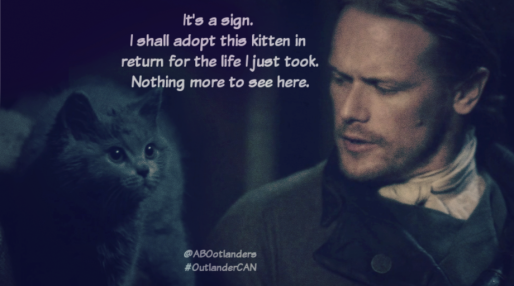 And you…me…we have each other. Many of us are spending much more time at home these days so I encourage you to check out other points of view about Outlander. I find other’s views of the show fascinating, especially when put together in a way that is respectful to others and spoken from a place of sharing. These are some of my favourite people who do this in the land of the interwebs, check out their websites/blogs/vlogs/chats.

Outcandour gives a brilliant, deep dive into the episodes. There is always something about the way she dissects the episode that resonates with me. I don’t tap into the same spaces she does, I end up reading them twice. I ALWAYS end up watching the episode after reading her blog, I then read it again after watching. It’s like a loop! So if I seem dizzy, blame it on T. 😘

Beth’s recaps/reflections are very different from my ‘not recaps and I love them because of that. So well written and I adore how she explains her views, helpful for those who see things from other perspectives. To me, that is the point of sharing our thoughts, not to be an echo chamber for people who agree with us but to help one another stretch a little.  Not necessarily to change people’s opinions but to have them see things from another person’s lens. I get to do that a lot with Beth and I admire her.

Erin from Three if by Space covers so many great shows so Three if by Space will keep you busy if you want busy. It’s her reviews of Outlander that I read most of course. I don’t read many reviews bc as you all know, I’m a happy finder. I want happy happy happy, even though Erin doesn’t pull any punches in her reviews, she writes with integrity. I don’t always see eye to eye with her (not just cuz she’s tiny…she IS tiny) but that isn’t the point. She expresses herself with honesty and isn’t a dick about it. I really enjoy smart people. So…I enjoy Erin, very much.

Blacklanderz ~Vida puts together some wicked conversations, in print, between members of the Blacklanderz community. I find them fascinating. Not only do I see things from more than one perspective but I often learn things. I don’t claim to be anything other than who I am. I am a middle class, privileged, white woman. That is the lens I see through. Do I try my damned best to listen and be an ally to POC? Yes. Do I always get it right? Nope! Sitting with the community that Vida has created here, is pretty damned impressive.

Courtney and Company, from Outlander BTS. Oh, they make me smile.  They are another group of really friggen smart women that get together to talk about the episodes. I don’t always agree with them but holy shit, do I respect them. The beauty of their video discussion is they don’t always agree with each other and like the adults they are they keep the discussion going. I’m not relegating anyone here…Courtney has the most adorable dimples to go with her delightful brain, you just get the best of all the goodness.

I know there are many others, if you have a favourite, please add them to the comments. I think it would be nice to support one another in our Outlander adventures rather than get all wrapped up in things that might not bring us joy. The world is going all kinds of everything out there – we know it, we are doing what we can to stay healthy- maybe this will help us stay sane(ish).

Don’t forget to live tweet with us Canadians while watching W Network at 7pm MST, using the hashtag #OutlanderCAN

3 thoughts on “The Weight of Guilt. My ‘not a recap’ look into Ep05 of #Outlander. Perpetual Adoration.”