You know after watching Episode 2…I sat.  Just…sat. Then I started thinking…that’s when I smelt smoke.

How would one do a recap without creating a commentary?  There was simply TOO MUCH AWESOME in that episode to just regurgitate it all back at you like so many already do.

I call it the Rapid Fire episode.

So…instead of doing my blurt like recap.  I am going to give you a top 10 Things I Loved … along with some of the tweets from #OutlanderCAN.  #OutlanderCAN is the hashtag us ABOotlanders came up with before season 1 started.  Showcase has come aboard using it in support.  They added a fun lil contest this time as well.  We hope that becomes a regular occurrence.  Let’s just say Showcase has upped their game since the “win a subway giftcard” days

Don’t you love when each episode starts  – “Previously…on Outlander”? Showing us in quickies what’s occurred in other episodes which will “refresh” us for the next one.  So many of us…previously on Outlander means – we have watched it…not once…not thrice but repeatedly in an unhealthy way.

When it comes on…we are just hitting the person next to us “It’s on! It’s on! Shhhhh!”

Quiet now, the grownups are watching!

The 10 Things I Loved about Episode

Shall I narrow it down for you a little? Yep, the costumes…on ALL OF THE BODIES!  Terry Dresbach and her designers and all the other people that make that team simply have talent. Much talent.  You know it has to be a REMARKABLE team because the outcome is MINDBLOWING!   There was not ONE costume that I didn’t want to devour. See it all over, inside out and sideways. Not one.                                           Jon Gary Steele…ummm sir?  Is your brain filled like Master Raymond’s Apothecary?  I mean, I look at these sets! In my WILDEST imagination I could not picture a tenth … a hundredth… of what you have. Not only imagined but brought to our screens.  That, with the costumes and the lighting…this girl was AGOG! Mouth hangin open staring…AGOG.  I watch the show over and over evertime, this time…I want to watch it once more…pausing every 5 seconds or less so I can take in EVERYTHING. The apartments, the gardens, the streets, the brothel and Master Raymond’s.There was simply too much to love and you CAN NOT do it in one sitting. Seriously impossible! 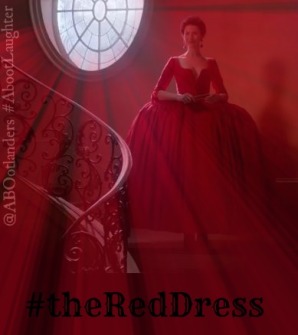 Jamies awkwardness and his reaction to her waxing session. Titter Titter. So many characters added to make us smile and laugh.  I enjoyed the dramatic flare of the whole thing…And let’s not forget…He was so good he got 2 votes on my list!

So much to smile about!

Some people wonder how I can be a 20 yr plus, book reader and be so “chill” with the changes.  Pretty easy really.  The book is the book. The TV show is the TV show.  The two don’t interchange in my mind.  Do I notice the difference and have an opinion? Of course…however if my opinion is just a negative reaction to something I was “hoping for”, I keep it to myself.  Why in the world of the interwebs would I do that?  I am not a professional, those who are in the industry are.  I find in the long run…if the characters are “familiar”. THAT is what matters.  Nuances, story details, physical traits and characters will not be the same. This should EXCITE us, not alienate us.       I cant  wait till next Sunday! Useful Occupations & Deceptions.  We get to meet Fergus and head to the ‘opital!