Sooooooooo,  how is everyone surviving round two of #Droughtlander?  It’s not fun, is it???

I think, because this drought is going to be AT LEAST twice as long as the first one was, we can’t even call it a drought.  We will be just plain #Withoutlander…. and that makes us #Distraughtlander.…   we will have it naught…..   it’s a full blown #Naughtlander!  (or #NaughtyLander – whichever blows your boat)

SOUND THE ALARM! BORED AB-OOTLANDERS AHEAD!

So the Naughtlander Book club was born – to wile away the time when we will have our #Cracklander back.

We could be reading Outlander et al again (that’s a given), buuuuutttttt we wanted to be #Distractedlander, soooo we put our heads together (what, no wise cracks?)  and had an AB-Ootlander vote, and the book we chose to read for July isssssssss…..

The Memory Painter by Gwendolyn Womack 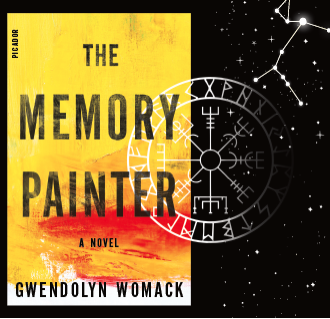 Gwendoyln has agreed to participate with us!!! SQUEEEEEE!!!!!!!

“Bryan Pierce is an internationally famous artist whose paintings have dazzled the world. But there’s a secret to Bryan’s success: Every canvas is inspired by an unusually vivid dream. When Bryan awakes, he possesses extraordinary new skills . . . like the ability to speak obscure languages and an inexplicable genius for chess. All his life, he has wondered if his dreams are recollections—if he is re-experiencing other people’s lives.

Linz Jacobs is a brilliant neurogeneticist, absorbed in decoding genes that help the brain make memories—until she is confronted with an exact rendering of a recurring nightmare at one of Bryan’s shows. She tracks down the elusive artist, and their meeting triggers Bryan’s most powerful dream yet: visions of a team of scientists who, on the verge of discovering a cure for Alzheimer’s, died in a lab explosion decades ago.

As Bryan becomes obsessed with the mysterious circumstances surrounding the scientists’ deaths, his dreams begin to reveal what happened at the lab, as well as a deeper mystery that may lead all the way to ancient Egypt. Together, Bryan and Linz start to discern a pattern. But a deadly enemy watches their every move, and he will stop at nothing to ensure that the past stays buried.

The Memory Painter is a taut thriller and a timeless love story spanning six continents and 10,000 years of history.”

Want to read it too?  Well, join us as we discuss this wonderful debut novel at the end of July. Keep your eyes on the blog and our twitter here.  Oh and you may want to follow Gwendolyn Womack on twitter also here.